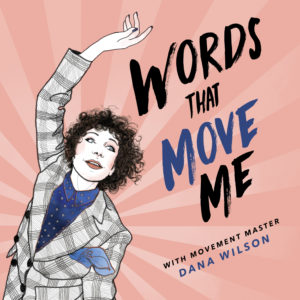 Words That Move Me with Dana Wilson
Ep. #91 The Club- Are You In or Are You Out?

This may be the first time we really dig into the subject of status and power dynamics on the podcast! FUN!!!  In this episode,  insiders and outsiders are under the microscope, and we approach the subject from the position of moving into a new role or industry AND I’ll point out how this power dynamic can shift during the course of ONE audition , or pitch meeting.  I hope that after listening to this episode, you focus less on meeting the dress code/ getting on the guest list/ paying the cover.  I hope this inspires you to become the VIP that you are and make the work that others want to be in on.

Re Listen to Episode 75 with Smac: https://www.thedanawilson.com/podcast/ep-75-being-creative-idiots-with-smac-mccreanor

Intro: This is words that move me, the podcast where movers and shakers, like you get the information and inspiration. You need to navigate your creative career with clarity and confidence. I am your host master mover, Dana Wilson. And if you’re someone that loves to learn, laugh and is looking to rewrite the starving artist story, then sit tight, but don’t stop moving because you’re in the right place.

Me again, wondering if you ever noticed that one more time. Almost never means one more time. Well, here on the podcast, one more thing actually means two more things. Number one thing. If you’re digging the pod, if these words are moving you, please don’t forget to download, subscribe and leave a rating and review because your words move me too. Number two, I make more than weekly podcasts. So please visit thedanawilson.com for links to free workshops and so much more. All right. That’s it now for real talk to you soon. Bye.

PODCAST: Words That Move Me

Sign up for links to free workshops, tools, and project updates